By E.J. Schultz Published: January 03, 2011 MINNEAPOLIS (AdAge.com) — Jamir Hopson always thought he wanted to be a cop. “I like to work with people,” said Mr. Hopson, a high-school sophomore from Minneapolis. “I wanted to stay connected” with people in the neighborhood. But that all changed recently when he enrolled in a diversity program called BrandLab that connects Minneapolis marketers and agencies with low-income high schools. Students take advertising classes and apply for internships at some of the city’s hottest shops. 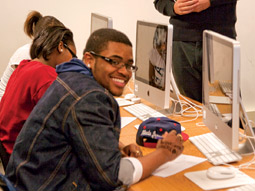 After a few classes, Mr. Hopson was hooked, and he realized advertising was a better fit for his personality. “The BrandLab actually made me want to change my occupation,” said the affable Mr. Hopson. “Working at an ad agency would be a lot more fun for me because I like to design and network.” Although his neighborhood might get one less cop, the ad industry will gain what it sorely needs — an African-American job candidate who will help bring more racial and socioeconomic balance to the overwhelmingly white field. And that’s what BrandLab is all about: introducing minority and low-income students to a career that many don’t know much, if anything, about, in hopes of influencing them to make it a career. “These kids don’t know about this field, that you can actually get paid to do what we do,” said John Olson, founder and chairman of Olson, a local indie agency he says has donated roughly $1 million in time and money to the effort. “And simply introducing them to the concept of getting paid to be in marketing, in this glamorous world, is a very simple concept.” Mr. Olson came up with the idea a few years ago, and in the 2007-08 school year dispatched agency employees to Minneapolis’s South High School, where they taught marketing to a group of Native American students. He slowly got other executives involved, and BrandLab is now growing like a hot start-up. The program — which has a budget of $300,000 — expects to reach nearly 300 students this year at 10 Twin Cities schools, with plans to reach even more students next year. Corporate funders include area stalwarts Target, General Mills, 3M, Best Buy, Land O’ Lakes, Schwan Food Co., Imation and Medtronic, while agencies such as Olson, Fallon, Carmichael Lynch, Larsen and Colle & McVoy provide guest lecturers and host field trips. Some shops host interns. And work is under way to take the program national, with the goal of reaching 50 cities in five years. Interest is coming from New York, Chicago, Miami and Los Angeles. In Minneapolis, BrandLab targets schools with at least 40% of students on government-sponsored free and reduced lunch programs that also have a minority population of at least 40%. Four part-time administrators oversee three part-time instructors who teach classes on branding, campaign strategy and print, radio and TV production, which are open to all students at the school. Volunteers from agencies routinely visit classrooms to conduct seminars. On a recent day at the FAIR school — a K-12 fine arts magnet school — two Olson creatives guided students through a mock scenario of a granola brand that wants to shift strategy and appeal to younger consumers. “Get into their mind-set,” Tom Lord, an associate creative director, told the class. “That’s what makes great ads.” Minutes later, students used an Olson worksheet to scribble out personality profiles for their target customer base — young consumers who are ready to try something a little healthier. Mr. Hopson, who was sitting in the back row, caught on quickly, throwing out the hypothetical “Amanda Appleton,” a journalist and part-time yoga instructor who hates smoking and watches “Glee.” Next up was Lou Flores, an Olson creative director, who told the students that if they are competing with Doritos “you gotta make granola cool.” “What if Kanye West was pushing granola?” he asked. “I’d eat it,” blurted Mr. Hopson. The class erupted in laughter. By the end of the semester, the class will have created a full-fledged campaign for the brand. It’s too early to gauge the success rate of the program because the alumni are still in college, officials say. But BrandLab plans to watch its former students closely, recently setting up a database to track how many end up in advertising or marketing. For Minneapolis marketers and agencies, the program is more than a feel-good effort — they hope to fill a business need by creating a local pool of diverse talent. Nationally, the industry is woefully short of minority-hiring benchmarks. African-Americans, 13% of the population nationally, should make up at least 9.6% of advertising managers and professionals, but composed just 5.3% in 2008, meaning 7,200 African-Americans were “missing” from agency ranks, according to a study last year by the Madison Avenue Project, a partnership of the NAACP and civil-rights law firm Mehri & Skalet. The study found that 16% of large ad firms employed no African-American managers or professionals, a rate that’s 60% higher than the general labor market. Cyrus Mehri, a partner at the firm, has suggested the industry has engaged in “purposeful discrimination.” Ad executives say they want to hire more minorities, they just can’t find them. “There are not that many candidates with diverse backgrounds getting into advertising,” said Christine Fruechte, president and CEO of Colle & McVoy and a BrandLab board member. “And how do you change that? You reach them at a younger age.”

Facebook, Now Worth $50 Billion Your Followers Are No Measure of Your Influence