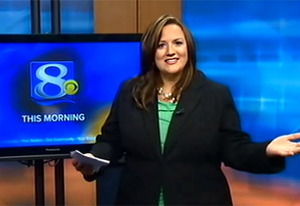 All hail the great, all-mighty, Social Media Network! Ever since Jennifer Livingston stood up to her bully, the power of social media has been evident around the globe. Many of us knew how important it was to keep a watchful eye on our business social media pages, but after this event, the realization really hit home.

When Jennifer received an e-mail from the La Crosse man who called her obese and unfit as a role model to kids, she retaliated. Her husband posted the e-mail on his facebook page,then she reposted it onto her own, and it blew up. She then went on to further stand up for herself on local television, and the story spread even faster. Around the country, celebrities like Ellen DeGeneres and Lance Bass were applauding Jennifer on Twitter, and soon people from around the globe were tweeting, blogging, talking, and posting about Jennifer’s message to her bully. All of this happened within a day and originated from the small city of La Crosse, Wisconsin.

So what can you, as business owners and professionals, take from this example? Besides some of the obvious things, like don’t mess with a journalist, there are 4 key social media lessons to take from this story.

Fortunately, nothing bad has happened to this man that we know of, besides a social bashing, but what would happen if an enraged fan tracked him down and hurt or killed him? Who would be responsible for his death? In a moment of hurt and anger, these are things that we probably wouldn’t be thinking about. But if you encounter a similar situation with a fan, take a second to think and hold back the reigns of your emotions. You can talk about the situation, but keep out names and other personal information.

Social media is a powerful tool. If you use it correctly, it can be a great tool for strengthening your brand, generating business, and increasing profits. If you don’t use it correctly however, it could bite you where it hurts; your pocket book…or worse!