Pokémon Go is a phone app that allows players to digitally catch and train Pokémon in “real life.” The app was released on Wednesday, July 6th, and has dominated our streets, filling them with “trainers.”

If you do not know anything about Pokémon, please begin at section A to learn about the background. If you do know of Pokémon but are unsure about what Pokémon Go is and how people are using it, begin at section B to learn about the mobile app. If you are aware of how to use Pokémon Go proceed to section C to see how your business can get involved.

Section A: What is Pokémon?

Pokémon is a franchise of games, TV shows, and movies that revolves around the catching and battling of Pokémon. Starting with a starter Pokémon, the player can catch wild Pokémon by weakening them and catching them with Pokéballs. Certain Pokémon can evolve into more powerful forms by raising their levels or using certain items.

The most well-known Pokémon include: Bulbasaur, Pikachu, Squirtle, and Charmander (ordered from left to right in picture).

The Pokémon Go mobile application can be downloaded in your app store for free. You then create an account with your Gmail address or through the app. Once you’re logged in, you’ll meet Professor Willow, who’ll give you an introduction to the game, and walk you through catching your choice of the three starter pokémon — either a Charmander, Squirtle, or Bulbasaur (names of Pokémon).

After that, the game/app pretty much leaves you on your own, aside from a small tips section that mostly explains basic map icons.  There are three basic parts to Pokémon Go: catching pokémon, visiting pokéstops, and gym battles.

Pokéstops are important landmarks, marked on the map as significant local locations. Visiting pokéstops is the primary way to get items in the game. When you’re close enough to a pokéstop to activate it, the map icon will expand into a spinning pokéballs icon, allowing you to tap on it to obtain items, such as pokéballs, potions, and eggs (which can be hatched by walking around). You can also activate lure modules at pokéstops, which are marked by a swarm of hearts on the map, increasing the likelihood of pokémon appearing there. Some items, however, can only be purchased with pokécoins, which can be earned by fighting in gym battles or bought as in-app purchases (continue reading to learn more about these terms). 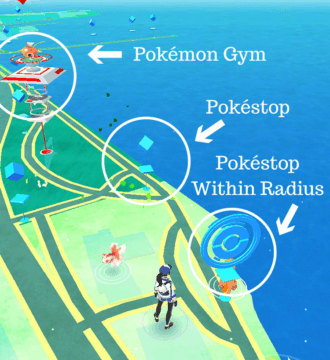 Section C: How can your business get involved?

You’ve probably seen groups of people playing the game in public. They hold their phones upright as if they’re taking a video or a picture, and they swipe their finger in an upward motion to catch the Pokémon. It’s important to know what the app users look like because they are the people that you are targeting and trying to attract into your business.

In order to find Pokestops and gyms you must have the app downloaded and a user created. Pokestops are where Pokemon Go users (aka trainers) gather. They must be physically near the Pokestops to take advantage of the free gameplay items that they can receive from them. Because this is where the users are gathering to collect items, you want to entice them to visit your business while they are at the nearest Pokestop. 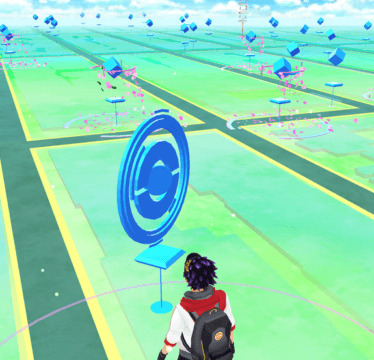 Pokestops can be landmarks, businesses and street art. To find if a Pokestop is near your business, open the app and look for the blue floating cubes. The cubes change to larger blue circles once you are within radius of it, indicating to users that they can now open that Pokestop. There is generally a Pokestop on almost every block inside of a busy city. As you move away from the city, they will be slightly more scarce.

Pokémon gyms are similar to Pokestops because they are places where trainers (app users) can battle each other, meaning they need to physically gather at the gym in order to participate in that battle. To find out if a gym is near your business open the app and look for tall totem-like markers with floating Pokemon on top of them. If your business is near a gym take advantage of the extra foot traffic and the users that are gathering near. 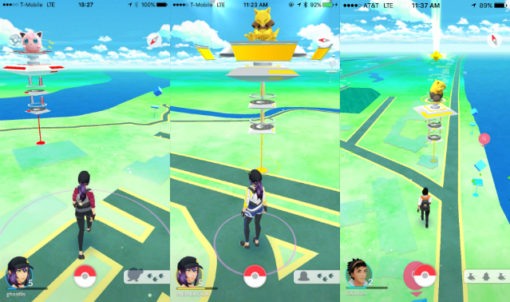 Currently you cannot add a Pokestop or gym near your business, but this is expected to change in the near future. Continue reading to see what you can do to attract Pokémon Go users to your business.

In order to use a lure module, you must have the app downloaded and a user created. A lure module is an item that can be placed at Pokestops, to attract Pokemon to them in order for them to be captured by players/app users. When a lure is placed on a Pokestop, a pink ring of flowers circle it, alerting any other players that are in the vicinity of the lure. This means that players are more likely to venture towards these Pokestops in the hope of getting their hands on more Pokémon. 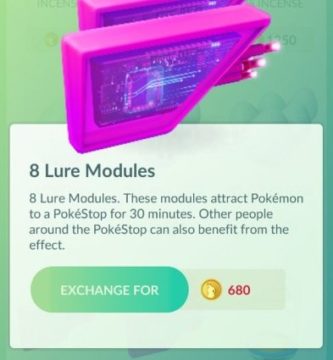 Lures only last for 30 minutes at one time, and are not easily obtained in the game without the use of real cash. One lures costs 100 Pokecoins, which translates to $0.99 in real-world cash, you can also purchase 8 lure modules for 680 Pokecoins costing $9.99. Use lures with periods of the day that are likely to generate the most foot traffic. The closer you are to the Pokestop the better, because you’re more likely to get app users entering your business to and from the Pokestop.

After placing a lure at the Pokestop near your company, leave a sign outside expressing how “Pokémon Go trainers are welcome” and wait for an increased amount of people glued to their smartphone to enter your establishment.

To set up a lure module: click on the Pokeball in the bottom of Pokemon Go’s home screen, select ‘Shop’, purchase Pokecoins, purchase Lure Modules with these coins, open the desired Pokestop and select the small white oval shape on top of the spinning circle. It will prompt you to then add the Lure Module. The lure will begin immediately and you should see the pink flowers surrounding that Pokestop inside the map view. 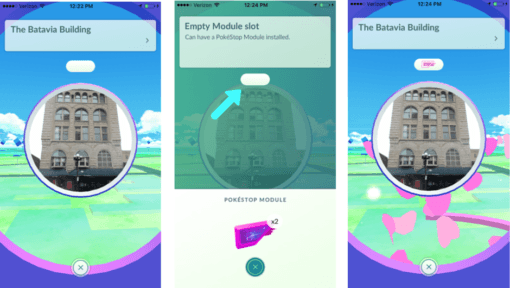 This is one you do not have to have the app downloaded for. In 100-degree weather, water is a must for Pokémon trainers (users of the app). If you post a small sign that welcomes players into your establishment and advertises free water, it’s a great excuse for people to walk in and buy something.

The Pokémon Go app quickly drains phone batteries. If you have open outlets, a charging station, or portable chargers use them to entice trainers to stop by your business to take a quick charging break.

You could also sell or giveaway branded portable chargers to trainers to encourage them to carry your charger around town with them while playing the game, increasing exposure for your business.

You do not have to be a user of the app to create specials for those who do use it. The game is digital, but the people playing are working up appetites. If you run a restaurant or coffee shop, welcome visitors with specials or discounts in honor of the app.

Pokémon Go will soon include advertising, according to its developer. Businesses will be granted the paid opportunity to be featured prominently on the game’s virtual map (that pops up as soon as you sign into the game), in the hopes of driving customers into their facilities.

Advertisers will be charged on a “cost per visit” basis, similar to the “cost per click” used in Google’s search advertising. More information will be released to the public about advertising in the near future.

Pokemon Go doesn’t feature trading between players currently, though developers are looking to introduce it in a future update. This is where users of the app will trade their Pokemon catches with other app users. With Pokemon trading, players will be looking for places to socialize with one another in order to exchange Pokemon. If you specify that your store/restaurant is a place in which they can do so, then you should expect players eager to begin trading with one another to visit your business.

Put a sign out front to show you encourage Pokemon Go-ers to stop into trade. More information will be released about to the public about Pokemon trading in the near future.

4 Effective Local SEO & Positioning Strategies What Makes Up A Brand